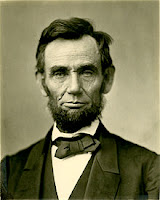 A commercial for Geico depicts Abraham Lincoln, the husband, with what is arguably the most treacherous question ever put to any married man. "Does this dress make my backside look big?" Wrapped in a pregnant pause, he struggles against his own compulsion toward honesty, resisting the painful and obvious answer, making this spot a beautifully humorous capture of the man and his brand promise.

Quite a bit of myth surrounds Lincoln, including endless commentaries describing Lincoln as a frontier gentleman. He was also characterized as "Father Abraham," the guardian of Federalist authority and humble defender of the weak. Yet, to the South and a few modern critics, Lincoln was the evil (pronounced ee-v-il) slayer of liberty and states' rights, and the father of the dominant national state.

Inextricably bound to the Lincoln brand is the Civil War—America's epic 4-year clash between the North and the South over the afore-mentioned issue of Unionism and state sovereignty. However, the real catapult for Abraham Lincoln into immortality was his assassination on 15 April 1865. Not so much now, but at the time it made him a martyr. He was shot on Good Friday, and died the next day, making him Christ-like to many. 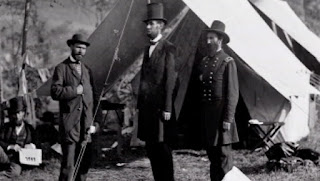 Today, Lincoln is sometimes underestimated in our portrayals of him. Part of the Lincoln legend is that he wasn't a very successful lawyer. That's simply not true. Yes, Lincoln was a self-taught prairie lawyer, but he was both shrewd and cunning, which earned him a solid reputation. In fact, the term prairie lawyer was never a rating of his abilities. Rather, it refers to the fact that Lincoln followed a circuit court as it made rounds through its jurisdiction. Lincoln did so by horseback or buggy, traveling hundreds of miles over, well, prairie land, from one little county seat to another. Although most of the cases and fees were petty, Lincoln managed to earn up to $1500 per year. Not bad for the times, and quite comparable to the $1200 the Illinois state governor might earn.

Lincoln's law career advanced considerably. Ultimately he argued before the United States Supreme Court, as well as several times before the Illinois Supreme Court. Within 20-years of starting his legal career, Lincoln was well distinguished as a fine and successful lawyer in Illinois. He was also noted for his practical common sense, which gave him an out-of the-box view into the heart of cases he argued. And that helped build his reputation as invariably fair and genuinely honest.

A brand analysis here might seem undemanding, still it is worth exploring–especially since Lincoln's birthday is this month. Therefore, submitted for your approval...

Keep it simple stupid—and rightly so. Honesty is the single attribute that remains the persistent differentiator throughout the Lincoln era—from his days on the farm to his rise as an attorney, and his career as politician, to his final hours as Commander-in-Chief.
Either as a lawyer or a politician, his dealings are well documented and replete with examples of his most famous character trait. He was never one to over charge a client. In some cases he refused payment when the client was in dire circumstances. Those things are commonly cited. But one example is striking because it is a simple admission while he was president.

Lincoln disagreed with General Ulysses S. Grant over strategy at Vicksburg. Contrary to Lincoln's preference, Grant crossed the Mississippi River and turned back to approach Vicksburg from the rear. Grant was successful, and in a letter of congratulations, Lincoln admitted his own error. “I feared it was a mistake,” he wrote. “I now wish to make the personal acknowledgment that you were right, and I was wrong.”

The value proposition with Lincoln was equally simple—trust. Everything about the man, regardless of his station, was that he was the real thing. His beginnings made him genuine, hard work earned him respect, and his beliefs were heartfelt—whether about the survival of the Union or for personal liberty. You could really trust Lincoln. That's the ingrained benefit to his honesty attribute.

History has really done that for us in the legend of Honest Abe.

On 12 February 1809, Abe Lincoln was indeed born in a one room log cabin. That image has alone characterized the Lincoln the man. The simple log cabin illustrates his humility and the frontiersman ideals that shaped Lincoln the President. 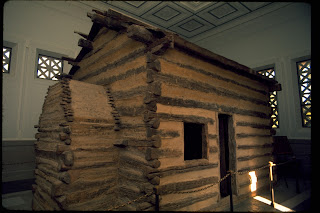 Footnote: The popular toy Lincoln Logs are often but mistakenly attributed to Lincoln. The toy was invented by the son of architect Frank Lloyd Wright. Lincoln is reference to the architect's given middle name.

After the Union army took Richmond, Virginia in April 1865, President Lincoln toured the former Confederate capital. Walking the city streets, he was greeted by dismayed whites, while freed men hailed him as a hero. Most telling of the man is that when a general asked how the defeated Confederates should be treated, Lincoln softly replied, "Let 'em up easy."

The truth of the matter is that Lincoln led by example. And while his example was attractive to many, the times in which Lincoln lived was a swirl of conflict. As Commander-in-Chief, Lincoln also bore little tolerance for failure. Several generals failed in attaining objectives Lincoln set for them. Ulysses S. Grant would ultimately accomplish Lincoln's military priorities. As a result, he earned Lincoln's loyalty and indulgence.

Lincoln deeply believed in the United States of America. That is the program he ascribed to and was so deeply ingrained in who he was. Nothing more exemplifies his living the brand than the Gettysburg Address. Delivered at the dedication of the Soldiers' National Cemetery in Gettysburg, Pennsylvania, on the afternoon of 19 November 1863, this brief but powerful speech lasted three minutes. Consisting of only 272 words–that's just a few paragraphs–Lincoln reinforced the ideals leading to the birth of our nation, "conceived in Liberty, and dedicated to the proposition that all men are created equal."

Lincoln also described the Civil War as a struggle dedicated to the principles of liberty and equality. And that the deaths of so many brave soldiers would not be in vain, that slavery must end as a result of such losses, and that this democracy would be assured for future generation. Finally, the address provided confirmation from Lincoln that, "government of the people, by the people, for the people, shall not perish from the earth."

Abraham Lincoln, the brand, only scratches the surface of the deep, rich and complex story of the actual man. It's easy to dismiss further research because we think we know all we need to about him. But if anything, schoolbooks and pop culture should beckon us to drill deeper. Consider this for a moment: A nation's leader whose total education consisted of essentially five books, having prepared himself for the bar by reading just two more books. His military expertise came not from battle, but from diving into the Library of Congress to absorb military writings–and while in the middle of a bloody conflict with enemy forces never very far from his capital.

For more on Lincoln, the extraordinary man, start with biography.com.