Up to His Ankles in Legend

Achilles is a truly legendary brand from the ancient world. He is written as the invincible hero in Homer's Iliad. And yet his brand was very well established long before Homer wrote his epic tale and the Achilles brand remains strong to this day.

But was he real?

Possibly, and probably—not that it impacts the Achilles brand. Although you have to set aside the scholarly debate about fact and fiction in Homer's work. Like all ancient scribes, and even the venerated historians, Homer included embellishments in his characters, wrote of the gods intervening in human affairs, and so on. That doesn't disprove the essential Achilles. Not unlike the Iliad and accepted ancient historical accounts, contemporary historical fiction similarly stretches the truth all the time. That even happens in supposedly objective modern journalism.

So number one on the ignore list is the whole "Achilles heel" concept. That was conjured up by a poet in the 1st Century AD to explain why Achilles seemed to be so invulnerable (see more on this below in the Sidebar by Wayne Rowe). The ancients had no such element in their original Achilles traditions. In fact, Homer writes of Achilles being wounded during a fight with Trojans.

Once you pull the fantastic out of the equation, a couple of things stand out about the potential reality of Achilles.  Item one is that he was not an original creation of Homer. Oral traditions featuring Achilles long predate the Homeric epics and, in fact, he appears in other stories by Homer's contemporaries and on into the early Christian era. That much press might suggest a real Achilles who was a brave warrior fighting with the Greek armada at Troy.

His exploits were so important that Alexander the Great aspired to be like Achilles; and it was written by historians that he even visited the tomb of Achilles and took his shield from the temple of Athena. Alexander was convinced the shield is what helped him win his campaigns into the Middle-East. He then took it a step further and believed he was a descendant of Achilles from his mother's side. Oh yes, it is written that Achilles had offspring.

Still, who was Achilles? Legend says he was the son of the nymph, Thetis, and Peleus, the king of the Myrmidons. Along with that are a lot of naughty antics over Thetis by the gods Zeus and Poseidon. Again, set those aside and go with the idea of Achilles' mother being a nymph. Mythology describes them as nature spirits appearing as beautiful young women. Well, men in rutting stages still think of attractive women this way. So let's just call Thetis an "it" girl with whom a king fell in love, resulting in a child—Achilles, who would have been a prince. Ultimately he would have been a king, which justifies him being part of Agamemnon's coalition of kings as described by Homer.

All that said, Achilles was born in a region of Greece known as Thessaly (that's where legend puts the home of the Myrmidons). The exact when is a mystery and always will be. However you could say it happened a long time ago in land far, far away. 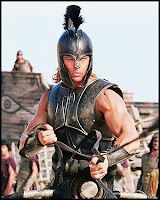 According to Plato, Achilles was the Brad Pitt of his day, but without mention of Mr. Pitt. What a coincidence, right? Pitt starred as Achilles in the film, Troy. Also in the time of the ancients, Achilles was the deadliest warrior—practically invincible.

A huge source of that invulnerability, at least on the battlefield, was his armor. Although he should have warn it more often, having finally been killed when not wearing it. Okay, he was pretty, he was tough, just not necessarily bright.

After his death, Achilles' armor was coveted by other warriors and sparked an epic feud between a few of them. Eventually the armor was passed to Neoptolemus, the son of Achilles. Yep, there's mention again of that offspring. This leads to a direct connection with Alexander, beyond bloodlines. Achilles' bronze-headed spear was said to rest in a temple of Athena on the acropolis of Phaselis, Lycia, (breath) a port on the Pamphylian Gulf. And that city was also visited by Alexander in 333 BC, though he did not confiscate the spear, which remained there until it disappeared in the 2nd Century AD.

Whatever his true deeds may have been, they must have been of such note that Achilles made a lasting impact not only on ancient Greece, but also Persia, Egypt and beyond—and into our modern brand awareness.


Achilles was a fierce, seemingly invulnerable warrior. Apparently he never lost a fight—or at the very least just a few. He is the winningest, deadliest warrior in the annals of time. The keyword here is “warrior.” The mention of the word in western culture brings Achilles to mind. Alexander thought so. As a result, we can position Achilles as the ideal warrior.

2. Devise a distinctive way to articulate the brand position and develop a brand personality customers can use to introduce the brand.


In the case of Achilles, we can combine two normally separated components of the analysis. Because the answer for both is the same. Here the brand is the category and the category the brand. Mention Achilles and the ideal warrior comes to mind, embodying the traits of ferocity, invincibility, and heroism. 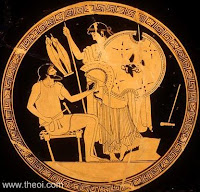 
Achilles was and continues as the picture of a supreme warrior. His armor is symbolic of his fighting prowess, in particular the spear and shield. Rarely is Achilles depicted without, at least, either or both.

4. Implement internal branding programs to reward employees for behaving in ways that are consistent with the brand personality


A warrior king, Achilles commanded what was considered at the time Greece's finest army, although primarily mercenary in nature. They were staunch in their loyalty to Achilles, no doubt because the rule of war in the day gave much of the spoils of war to the fighter. And with Achilles at the lead, there were a lot of spoils won. Homer also wrote of Achilles being noble in his nature and with high regard for his men. This is illustrated by the moment in which Achilles sends his men home so as not to be dishonored by the slaughter at Troy.


The power of the Achilles brand and its endurance for at least three millennia says something about living the brand. Who ever he really was, whatever he really did, left us with the indelible expectation that he was the supreme, ideal warrior.

Brand re-vitalization can be tougher than new brand development... Market perception is sticky and stubborn. Is the exercise to see if you can take a brand 180 degrees or overcome a brand perception issue?

Although the heel concept came along later, (very disappointing to learn) it is single handily responsible for the longevity and popularity of the legend. How do we ignore that? It's a very powerful concept that has come to define the brand. To change public perception I think we need to tackle that head on, not ignore it.

Wayne Rowe is Creative Director at Communicatos in Toronto, Canada.