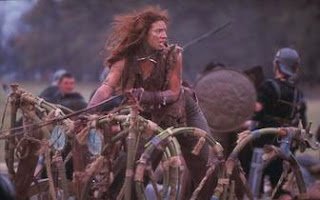 Queen Boudicca is a cult favorite in England and among many feminists with good reason. Around 60 or 61 AD, she led a pretty sizeable revolt against the occupying Roman army. Her force consisted of something on the order of 100,000 against four or so Roman Legions, which means she had Rome outnumbered 4 to 1, if it is assumed that the normal headcount for the time was 5,000 men per legion. Now, it must also be noted that the whole history of Boudicca’s revolt is not found in native literature from the British Isle. She is documented in various Roman histories, so the odds may have been inflated to make the Romans look as both underdog and additionally triumphant. And with no local accounts, well, we never hear the British side.

Boudicca herself is a bit of fog. For instance, the spelling of her name is inconsistent. You can find her name as Boudica, Boudicca, Boadicea or even Buddug. And then there are Bunduca, and Voadicia. The ancients can give you a headache with their variations. But because we get accounts of her from the only primary sources of the time, the Romans Tacitus and Dio, we will go with Boudicca. According to Kenneth Jackson, a linguist who specialized in Celtic languages, Boudicca’s name is rooted in the Celtic expression for “victorious.” That suggests that she may have had a birth name, although that remains a mystery.

What else we know of Boudicca is limited, but we do know is that she was considered royalty. She was married to a tribal king, Prasutagus. He ruled over the Iceni whose territory was approximately the Norfolk area of the farthest eastern point of modern day England. By the mid first century AD, we’re talking a blend of Celtic and Anglo-Saxon blood. This is evident in how Roman historians and scribes describe Boudicca. She was tall, and was a dishwater blonde—Romans used “tawny”—with locks falling below her hips. Boudicca did not have a soft, feminine voice. Dio remarked that it was “harsh.” And she was reported to have a glare that would scare the bejeezus out of an opponent. Underscoring her imposing, fierce-looking presence is the fact that she was very intelligent, and from time-to-time she would wield a spear as she spoke. Tacitus and Dio record Boudicca as giving rousing and intense speeches to rally ally tribesmen to her cause. She spoke not as mimicking a man, or as woman to men, but as leader who also suffered the wrongs imposed by the Romans, rallying men, women, even children to her forces.

Imagine just what it was that earned her wrath. Knowing Romans, it wouldn’t be difficult—the local occupying Roman authority wound up behaving as Romans—and then some.

Her husband lived well. Southern Americans would say he lived high on the hog—and way beyond his means. So part of what befell Boudicca is on her husband. But that fed, even taunted the Roman role in this. Essentially, Prasutagus ruled a small kingdom, which was a voluntary ally to Rome. This likely came about as a negotiation with Roman emissaries who bore news of impending Roman conquest. The deal was that the Iceni leadership and patrician class would remain intact, but under Roman guidance. Usually when the negotiating monarch died, the whole territory, people, livestock and such came under Roman rule and ownership. Indeed, Rome was mentioned in Prasutagus’ will, although sharing the kingdom jointly with his wife and two daughters. And there’s the rub. Roman law is patriarchal and in no gender equal. It only allows for inheritance through the male line. When Prosutagus died without a male heir, Rome proceeded according to custom and annexed the Iceni tribe and territories. As if that weren’t bad enough, Roman forces flogged Boudicca, raped her virgin daughters, and stripped the king’s relatives of holdings and position, then sold them into slavery. The plunder of Iceni was so complete and so grievous that even Roman slaves took booty from the house of Prasutagus.

Any one of those individual offenses would have been enough to spark outrage, but together … here comes the wrath of mom. 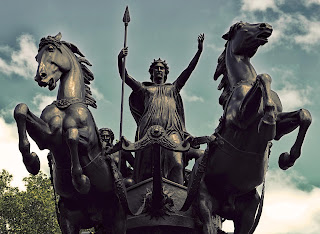 Fury was let upon the Roman colony of Camulodunum, which was destroyed by Boudicca and her army in two days. Next was Londinium, and then Verulamium. These are modern cities of Colchester, London and St. Albans. Boudiccan forces slaughtered anything in their path that was anything Roman or akin to Roman. Although numbers are in question, Dio cites around 230,000 troops for Boudicca against an estimated 10,000 for the final battle. Even if you boost Roman numbers and slash Boudicca’s by half, the Romans are well outnumbered. So it is no wonder that Suetonius, the governor of the area, picked for his last stand a very narrow gorge with a thick forest behind him. No doubt he’s read his Greek history and pulled from the pages of King Leonidas I and his 300 Spartans.


Whether 10,000 against 230,000 or only 100,000 Boudiccans, “their numbers counted for nothing.” In a narrow field of battle, Boudicca would not be able to flank Suetonius, or hardly even maneuver her forces. Indeed, she wound up pinned against her supporting wagons and encampments. Romans repaid the slaughter of their three cities. The rebellion ended in some undesignated place along the Waitling Street, a long road bisecting the island, but probably somewhere in the center regions.

Tacitus says that Boudicca committed suicide, but neither Tacitus nor Dio mentions the fate of her daughters. Nobody came out on top, really. Boudicca was dead, Rome was in disgrace, even to the point then Emperor Nero considered pulling out of Briton. Legion commanders who’d been defeated earlier, fled to Gaul in cowardice. A few commanders did not rally to Suetonius’ call to arms, and overall, Roman behavior was less than honorable.

Ultimately the whole affair was disastrous. But what shines through is that Boudicca didn't accept defeat. She stood her ground, endured, and then sought to rally the locals against an occupation army that was, in effect, looting their country. She went down, yes, but she took a piece of Rome with her.

Therefore, submitted for your approval…


According to Tacitus, Boudicca said this,

It is not as a woman descended from noble ancestry, but as one of the people that I am avenging lost freedom, my scourged body, the outraged chastity of my daughters. Roman lust has gone so far that not our very persons, nor even age or virginity, are left unpolluted. But Heaven is on the side of a righteous vengeance;

Boudicca was avenging the wrongs imposed her with the fury of woman. And while she somewhat tried to set aside her nobility, she actually was using it as reason for deserved leadership, but reinforced it with the fact that she was wronged just as the people were wronged—perhaps more so.


Boudicca was the avenging queen, the lady warrior…


Boudicca’s physical description is enough to make a statement, but the symbolism of her leadership and justification of her cause was wholly wrapped up in the fact that she led from a chariot, attended by her two “outraged” daughters. Remember that Boudicca herself had been flogged, but it was her virgin daughters that had been brutally raped.

4. Implement internal branding programs to reward employees for behaving in ways that are consistent with the brand personality.


The root message from Boudicca was simply, fight or be slaves. Essentially she was saying, be you woman, man or child, your fate is tied to your willingness to battle against Rome—an oppressive enemy bent on discarding Britons, regardless of tribe or standing, and make of them slaves.


Boudicca did not have long to firmly establish her brand. She was defeated after only three main attacks against Roman cities. But she incited fear into the colonial Roman forces. Her legacy was disgrace to Rome, regardless of its ultimate victory, and her name stands forever as a symbol of an avenger.