It's All Greek to Me

We’ve been taught that Greece is the foundation of western culture and the birthplace of democracy. That’s not quite the truth. Few realize that as a nation, Greece didn’t exist until 1832. The term "Greece" is a neo-geographic expression of what we have come to call a collection of city-states located on a peninsula in the eastern Mediterranean. What’s more, our image of Greek culture stems from classic icons like architecture, philosophy, science, and art. And more often than not, many of those examples are Athenian. That’s not to say that none are available from places like Thesbia, Arcadia, or any other city-state. It’s just that Athens is one of two dominant polises of the Greek region. 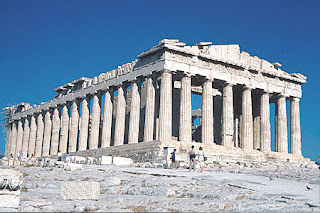 By the way, the proper name for Greece is actually Hellas. The origin of that name is a minor mystery — nobody seems to definitively know how that came to be, except that the term took hold somewhere around the time Homer was writing the Iliad.

Until modern times, if you were Greek, or a Hellen, you thought of yourself as Athenian or Spartan or Thesbian. Greeks had this tendency to be very tribal. In fact, that’s how they started back in the day when they migrated from the areas of the Ukraine somewhere around the second millennia BC. So even though most of the people of all the city-states in Greece shared a common ethnicity, they were subdivided from various tribes, like Doric, Attica, Ionian, etc. They further diverged in terms of religion, dialect, and customs developed within their own city-states.

Just look at the differences between Athens and Sparta. Athens was the seat of early democracy and a mecca for philosophy and art. And the Athenian dialect was considered the more prestigious among the Greek language (and which is most closely identified with modern Greek). On the other hand, Sparta was a pure military state that enslaved the indigenous populous of its region as farmers and laborers. 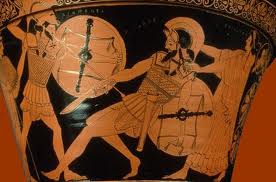 Athens and Sparta were in no way buddy-buddy. But don’t be fooled by Athenian pretense of academia. Tribal status trumped everything else and their roots were also in a warrior culture. So they liked a good fight now and then.

There were a couple of brief stints where city-states joined up to present themselves as a whole people. The most famous of which was the Battle of Thermopylae where King Leonidas led 300 Spartans against a million Persians. What is often overlooked is that there were actually 7000 Athenian, Arcadian, Thesbian, and Phoecian soldiers at the back of the Spartans. Equally passed over, and criminally so, is the fact that Athens had a navy of about 200 ships keeping the Persian fleet at bay. And that fleet was led by the Athenian, Themistocles.

Rather telling in this brief moment of nationalism is the attitude of Leonidas, the Spartan king having led his 300 against Persia at Thermopylae. Xerxes offered Leonidas governorship and control of all Greece if he submitted to Persia. According to Plutarch, Leonidas said, “I would rather die for the liberty of Hellas than be a monarch over my countrymen.” 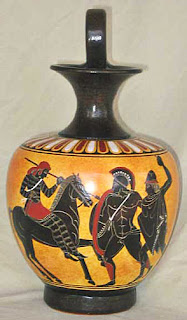 Considering that Sparta and Athens were bitter rivals, that says a lot of Leonidas' regard for fellow Hellens. In fact, so much so that he and his men held Persia at bay while Athens was evacuated. You could look at Greek politics this way: it’s like you and your siblings; you beat the crud out of each other and that’s okay. But if somebody outside the family messes with them, you team up against them to protect each other. To paraphrase Plato in his work, The Republic, he argued that when Hellens fight among one another, they are in a state of disorder and discord. But should Hellens fight those outside, such as barbarians or Persians, this shall be called war.

So many scholars agree that Thermopylae was a turning point in Greek politcs. If that’s true, what happened? Why didn’t it stick? You have to go back to their roots in the Ukraine. As warrior tribes, the core of their belief was survival of the fittest. This theme was repeated during the Peloponnesian war, and every other seeming civil war in the region. Resources were scarce and by the gods, your city-state better command control over most of them or die!

It boils down to the Greeks themselves having a problem developing a real brand identity. Who are they? Athenians, Spartans, Ionians, Dorians, Hellens? Similarly, Americans have splintered tribal identities, such as Southern or Northern, Texan or Californian, west coast or east coast. What’s more, and especially now, the American conglomerate has little common shared ethnicity. So why should the Hellens be any less able to unite on a permanent basis then the American melting pot? 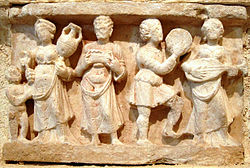 Perhaps the answer is as basic as the ability to set aside tribal differences and develop a desire to adopt core common beliefs and culture for the common good. In short, for Greece, it was the inability to take the unity from Thermopylae — a Greek brand identity from that moment ... and live the brand.

William Falloure is the producer of the award winning student documentary, The Hellenic Revolution.   He is a National Junior Honor Society member, as well 1st Place medalist in the Houston ISD National History Day competition for Documentary (2010/2011).