The Honor is to Serve 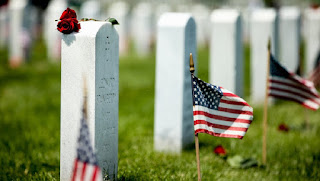 "The honor is to serve..." That's a Klingon saying. And while from a fictitious character, it nicely sums up the spirit of the men and women who serve in our armed forces—and very much those who have sacrificed in the defense of our nation. BIH highlights those who've honored a nation by their service. These entries highlight just a few instances that we should recall on Memorial Day.

Flying Tigers - These were the tough guys, the streetfighers of World War II. They came, they saw, they kicked butt and chewed bubblegum.

Living in Infamy - Pearl Harbor was a watershed moment for the United States of America. Reminiscent of Hannibal's defeat of Rome at Cannae, Japan made the same errors and let loose a sleeping giant.

Just a little bigger - Abraham Lincoln was never a soldier, but he studied hard about military history and tactics while leading a nation through a divisive war. And for his duty, he gave the ultimate sacrifice.

Red Tails - To squadrons of bomber crews gritting it out in the skies over Europe, the Red Tails were angels on their shoulders. This is "Pure-D" American, and it showed that absolutely no color mattered except one—Red.
Posted by Falloure at 10:54:00 AM No comments: