For it being a man's world, history is replete with incredibly intelligent, capable, strong, and commanding women who, with skill and cunning, pierced the armor of patriarchal society. And if there is one heroine that burns in the psyche of western civilization, it would be the divine brand of Joan of Arc—"The Maid of Orléans."

Here's a little discovery to fuel the fire of this essay. Joan of Arc was born around 1412, and her name was really Jehanne d'Arc. The d'Arc is debated as possibly being a referent to a geographic formation near her home. Nevertheless, through time she has become Joan of Arc, and best known as the maiden executed on 30 May 1431.  For the last six centuries she has remained a national heroine of France, and she has the value-add of being a Roman Catholic saint—a martyr. How she got there is a helluva story, inspiring French leaders from Napoleon to De Gaul.

The daughter to a peasant family in eastern France, Joan came into the world during the Hundred Years War, which was really several separate wars that raged between England and France from around 1337 to 1453.  It wasn't just the English against the French; it was also a fairly significant civil war among various royal or noble factions for control of the then vacant French throne. The French king, Charles VI, was a little whacked in the head, so his capacity to rein was in serious question until his death in 1422. Even before his death, there were those positioning and plotting to take over the throne. In essence, it was a lot like Frank Herbert's, Dune, or even to some extent, Star Wars - Episodes 1 through 3 (just no Emperor or Darth anybody).

Let's be frank (pun intended), the whole thing was a mess and getting into the weeds of another Middle Ages drama would be a yawner—if it weren't for Joan of Arc. Where the saga gets interesting is in the fact that this provincial child was given command of France's army to defend the throne. How cool is that?

Right off you have to know that Joan testified at her heresy trial that she had been subject to visits from several angels and saints since the age of 12. Including, but not limited to her divine friends, are some of Heaven's heavy weights, like the Archangels Gabriel and Michael, along with Saint Catherine of Alexandria and Saint Margaret of Antioch. According to Joan's testimony, she had always been urged to remain pious, but as France's situation worsened and it looked as if England would subjugate her, Joan's holy posse began urging she fight for her country, whom they said God favored in this situation. And this situation was grave.

The French people were hit hard by the Black Plague a century earlier. This war didn't help. The population suffered and they were looking for strong leadership, as most populations do in times of crisis. So by 1428, the set up for Joan was nearly in place because almost nobody had faith in Charles VII, and he was getting his military backside handed to him on just about all sides. With very few allies to turn to, and some of their support waning, divine intervention was going to be a welcome arrow in a nearly empty quiver of options.

A relative escorted Joan to a nearby town for an audience with Lord Robert de Baudricourt. He was a garrison commander as well as a Count, having inside access to the court of Charles VII. That was Joan's objective, to secure de Baudricourt's permission and sponsorship to visit the royal French court of Charles VII at Chinon (the seat of his flailing government). She warned de Baudricourt that Charles was about to suffer a terrible loss near the city of Orleans, however his lordship balked. You know what he thought, "Come on ... really?" What could a young maiden know of making war?  The idea wasn't that she needed to know, only that this sacred premonition was shared with Joan. So when her cautionary vision came true, de Baudricourt made quite sure that Joan arrived at Chinon in one piece.

This is where Joan's brand begins to take shape. Her hair was cut in the fashion of a man's, and she was dressed in man's clothing as well as armor. If her convoy were captured, then hopefully Joan wouldn't be recognized as a female, thus avoiding rape. And should any of her escorts get any naughty ideas, well, the clothing and armor were not user friendly for having relations. Joan wisely kept her armor on at all times until she reached Chinon. She also called herself La Pucelle, translated to mean the maiden or virgin, but you can bet she meant virgin. This is especially so because she had vowed to her saintly friends that she would remain chaste "for as long as it pleases God."

Once in an audience with Charles VII, she convinced him she was a godsend in short order. How? "I have come and am sent in the name of God to aid to yourself and the kingdom." Those were Joan's first words to the would-be king. She then revealed that God had heard Charles' prayer, one that she only detailed in private. Essentially, Charles had prayed to God for his help in defeating the English, and to help his people only if he were the rightful heir to the throne. But if Charles was not, then punish him alone for his sins and not the French people. 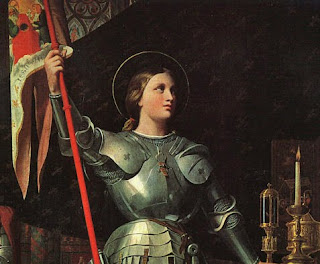 This was surely Providence. How else would this girl hear a prayer made only to God? Despite her knowing of his secret prayer, Charles followed an old adage among government officials: Trust but verify. If Joan were God's messenger and this conflict was to be morphed into a religious war, then her morality had to be verified. And it was. According to royal documents, a commission of good theologians "declared her to be of irreproachable life, a good Christian, possessed of the virtues of humility, honesty and simplicity." However the commission neither confirmed nor dismissed Joan's divine inspiration. Something like a 'favorable presumption' was assigned to the subject of her visions.

As with any instrument of God, there has to be a test. And tested Joan was. Her holy task was to end the siege of Orléans because the English were hammering the pulp out of the defending forces. Depending on who you side with in the scholarly debate over whether Joan actually led the army, or simply stood as a symbol of strength, faith, and courage, one thing is clear—all historians agree that with Joan standing at the head of the army, the forces of Charles VII were victorious.

Joan's career would be short. During a small skirmish, she did what any courageous leader of her day did—she fulfilled her duty to be the last person to leave the battlefield during a retreat. That's when the English-sympathetic French force, the Burgundians, surrounded Joan. She refused to surrender and was knocked off her horse by an archer.


Charles VII failed to ransom her or intervene in any way. As a result, the Burgundians sold her to the English. She did try a few daring escapes—even jumping out of a tower window to a soft dry moat 70-feet below. In reality, her fate was sealed and the English put her on trial for heresy.

There are a host of reasons why the trial would eventually be overturned, ranging from no ecclesiastical jurisdiction to outright political motivation to blatant dismissal of evidence—even a lack of evidence against her. There is no question that her trial was a fallacy, and Joan would be posthumously retried years after her death. Unfortunately, vindication was too late. The English trial condemned her to be burned at the stake.

Yet, she never wavered in her faith, her testimony, or her courage. Court documents record that she in many ways outwitted her inquisitors, which would ultimately be revealed when it was found some documents were altered.


Joan was devout. A commission of pious men, her virtue was confirmed. Her own testimony from the commission and during her heresy trial revealed that she firmly believed God spoke to her through visits from angels and saints—and her actions were those of a woman who believed she served France at the will and pleasure of God.

"...for as long as it pleases God." As His servant, Joan kept herself chaste because she promised she would, and only until God willed it otherwise. While many called her The Maid of Orléans, the moniker was often shortened to simply, The Maiden. Indeed, Joan called herself La Pucelle ... the maiden or virgin. This was the symbol of her devotion to God, and how she would come to be known.


No one symbol or image is wholly representative of Joan, but specific visuals do make her immediately recognizable. An easy one is the maiden at the stake—the image of Joan in white, bound to a large timber upon a bonfire. In fact, that is how she was executed. To this day a statue of a virtuous Joan standing in flames marks the spot.

Equally common is the portrayal of this iron maiden—the young girl with a pageboy in full armor. She is sometimes on horseback bearing royal standard. In others she is on her knees, holding a sword, and gazing to Heaven in prayer.


Joan made it plainly clear that an army of God must act as such. It is well documented that on arrival at Orleans, she expelled all the prostitutes from the camp. She then required all the soldiers to attend church and confession. She further expected every man to give up swearing, looting or harassing the populations of cities and towns attacked.

You might think there would be significant pushback—not that there wasn't some. Yet as troops complied and lived up to Joan's expectation, the army began to perform better. And under Joan's command, the army was bold and followed her strategies and tactics to repeated success.

Interestingly, her methods brought reinforcements from those who would have turned from Charles' cause. Indeed, because it was said a saint led the army, more men were drawn to fight.


Faith can be a funny thing. Many people tout they have faith, brag about it even. But how many really hold the line when it is their life on the line? Joan did. Previously mentioned was that she was tried for heresy. And how she conducted herself is as telling of the woman as anything else.

In her final address, she asked her accusers to pray for her and stated she forgave them. Joan also asked two priests to hold a crucifix before her as she was bound to a post atop a bonfire. She was overheard praying to God, even when the flames rose to consume her. Joan's screams were not in contempt, rather, she screamed the name of Jesus and prayers for help from the saints.

Joan of Arc—she lived and died her brand...