A Wing and a Prayer.

This one is a bit out of the mold because Reuters is a commercial brand rather than a specific historical figure. Well, that's not true, there is a founder and he is covered here. Nevertheless, Reuters is now strictly a brand. The last surviving member of the Reuter bloodline died in 2009. But catching my fancy is the way Reuter began his news agency. That's it. I just like the story.

If you're not familiar with Reuters, or to be accurate, now Thompson Reuters, you should know it's an information agency--financial, legal, and more--but the Reuters brand still lives as the world's largest news service. I naturally mention Thompson Reuters because in 2008, Reuters ceased as an independent agency and was merged with The Thompson Corporation, thus Thompson Reuters.

Speed and accuracy have been and are hallmarks of Reuters, and its how that rep was earned that makes reviewing Reuters so cool. The whole gig started in 1851when Paul Julius Reuter moved to Paris. Reuter was about 32 when he left his home in Berlin, Germany. This was about the time of the Revolutions of 1848--a series of public upheavals across Europe. Remember that European nations in the mid nineteenth century were monarchies, whose societies were an extension of feudalism.


The masses were over it and wanted true nations with democratic structures. Reuter was one of them. He was partner in a publishing firm that distributed "radical" pamphlets. No doubt he came under scrutiny from the president of the German Confederation, which was almost always a monarch.

Reuter worked for a news service while in Paris, though it wasn't long before he ventured back out on his own. Within a year he was in a small town on the edge of the French and German border, Aachen, where he launched a fully independent news agency. This is the cool part, he used carrier pigeons between Aachen and Brussels. There were very few telegraphs in Europe, so news traveled by train. Reuter's pigeons were a crucial link for getting news quickly between Berlin and Paris. They gave Reuter fast access to stock news from the Paris stock exchange. 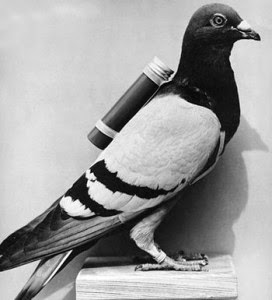 Ultimately a telegraph link was strung between Britain and the European continent in 1851, along with other lines connecting cities or regions. That same year, Reuter moved his operation to London, where he and the headquarters would stay. He continued using pigeons where necessary, but the the telegraph was growing more significant as his news and stock price information service grew. Still, he had active squadrons of carrier pigeons totaling 200 birds. So when telegraph service went down, for whatever reason, Reuter could still wing it and get the news out when his competition faltered.

Reuters developed a reputation for dependability, speed, accuracy, integrity and impartiality. The first newspaper client to subscribe was the London Morning Advertiser in 1858. It is worth mentioning that newspaper's subscriptions significantly expanded as a result. Another tidbit is that Reuters was the first news service to report Abraham Lincoln’s assassination.

The Reuters brand continues operating in over 200 cities around the globe. And it all started with on wing and prayer.