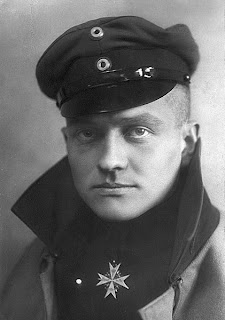 The Baron Manfred von Richthofen is the owner of the most enduring brand from the First World War—he was, and in history he will always be, The Red Baron. Controversy still swarms over who was responsible for shooting down the great Red Baron. But other than Snoopy, who really cares? Every warrior must eventually fall.

Richthofen's mark on history was the fact that he alone racked up 80 air combat wins during the war in less than three years. Twenty victories was nothing to scoff at and insured pilots their legendary status, along with the coveted Pour Le Mérite (the famous "Blue Max"). Richthofen had four times that and is still universally regarded as the "Ace of Aces."

The Baron regularly took British, French, and American air corps pilots to clinic. His prowess in the air made him a German hero during World War I and a twentieth century legend. His own people called him "der rote Kampfflieger" (The Red Battle-Flyer), The French called him "le petit rouge," and he is known in the English-speaking world as The Red Baron. And before you start yawning, thinking of Tom Cruise in an F-14 screaming at mach 2 with his hair on fire, let's put this in context.

WWI aviators were at the leading edge of air combat, flying in machines that were barely more than box kites with engines, and machine guns mounted as an afterthought. Planes were constructed mostly of wooden frames covered in canvas or lightweight fabric. No armor protecting the cockpit. No radio. No parachutes. Nada.

Those who became pilots in any military were extraordinary men. They had to be. And Richthofen was no exception. He was a man of courage and honor who seemed not to view opponents as vermin or faceless machines. He saw them as men and, like knights of old, were engaged in an aerial joust. His autobiography shows both his regard for the enemy and determination as a pilot. He once wrote of a fallen adversary, "...an honorable death at the hands of a 'worthy' opponent..." Richthofen once even placed a stone marker at the site of an opposing pilot's death.

Perhaps his nobleman's regard came from his heritage. Richthofen was the son of Major Albrecht von Richthofen, a Prussian aristocrat, and his wife, Kunigunde. Now here is an interesting brand attribute—one Richthofen shares with many great people of history. Family names of historical significants often have a relative meaning to the name holder's position in history. Richthofen is no different because the name means "court of judgement." And it was bestowed by the Holy Roman Emperor Leopold I in the late 17th century. More than 80 pilots met the judgement of the Baron, and few survived.

Young Richthofen was born on May 2, 1892 in what was then Breslau, Germany (now Wroclaw, Poland). He was the eldest of three sons and second eldest to his sister, Ilse. To follow in his father's footsteps, he attended military school at Wahlstatt, and then attended the Royal Military Academy at Lichterfelde. Admittedly a better athlete than student, Richthofen revealed in his autobiography a notion that he only performed adequately in academics, believing that was all that was necessary for the task.

Ultimately he became a cavalry officer and was commissioned in 1911, quickly rising to lieutenant in 1912. This brings up a side note. Eventually Richthofen would carry the rank of Rittmeister Baron Manfred von Richthofen. Roughly translated, Rittmeister means Calvary Master—and the rank would be a last vestige of old world warfare.

Ever forward-looking, Richthofen was no fool and saw that twentieth century warfare would gallop past the need for a mounted cavalry. The machine gun led to trench warfare, a place Richthofen knew was not for him. So he went maverick by looking to the new air service in 1915. And it led to his meeting a future mentor—Oswald Boelcke, who would remain Richthofen's hero and idol, and deservedly so. Before his death, Boelcke chalked up 40 kills of his own and literally wrote the book on aerial combat.

Richthofen was a natural, qualifying for his solo flight after only 24 hours of training. That was in October of 1915. Over the course of the next two and a half years, he would become the scourge of the air for any allied pilot unlucky enough to encounter him.

Things came to a head in April 1917, known at the time as "Bloody April." Following months of rain and cold, the weather allowed pilots from both sides to get in the air and start hunting. The German air corps tore the allies apart. Richthofen, himself, shot down 21 enemy aircraft and brought his total up to 52. He had finally broken Boelcke's record of 40 victories, and making Richthofen the new master of the skies.

As a hero, postcards were printed with his image. Heroic stories were spread everywhere. But what sealed the brand awareness for Richthofen was an idea on a spring day in Germany.

"One day, for no particular reason, I got the idea to paint my crate glaring red. After that, absolutely everyone knew my red bird. In fact, even my opponents were not completely unaware."—Manfred von Richthofen


Richthofen was a singularly determined man. While he even thought of himself as somewhat arrogant, that may have been unfair. He flew with one premise that defined the man:  "He must fall!" was the ultimate result of any encounter with opponents. He considered it the only acceptable outcome.


At the time of WWI dogfighting, advancements in aeronautical engineering were moving quickly. Any small advantage might mean the difference in battle, but not against the Baron. If it had wings, you were already at a disadvantage. Skill, nerve, persistence, and an understanding of aerial tactics won battles—men, not the machines were the victorious.

This quote has been attributed to Richthofen, though I haven't confirmed it. Still, it fits Richthofen to a "T" and serves as a concise articulation of Richthofen's brand position:

"It's not the kite, it's the man flying the kite."

(Note: WWI aircraft were often referred to as kites, or even crates because of the flimsy construction) 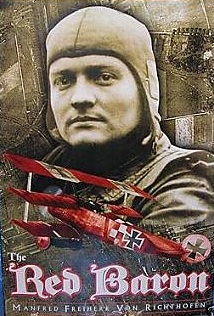 Few brands really get the perfect storm. Richthofen indeed was a baron. And the red color was born from the nose art of his mentor's plane. Amazingly, Richthofen understated the affect of red on his enemies. Certainly the bright red plane made an attractive target. Perhaps the color even served as bait. But it quickly became part of the Baron's persona, especially when the plane and pilot kept downing enemy aircraft. So the bright red plane emoted both respect and fear.


Part One - Big RED:  Though several other pilots had painted different sections of their planes special colors, Richthofen 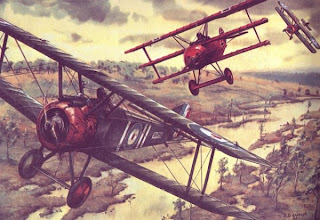 noticed that it was difficult to see these during battle. To get noticed, and think about that, to ... get ... noticed, from the ground and from the air, Richthofen decided to paint his entire plane bright red.

No one from either side had yet been so ostentatious.

Part Two: Meet the Fokker (Dr. I)! The Red Baron actually flew other aircraft as his victories mounted up. He's just best known for flying the bright red version of the Fokker Dr I—a trademark triplane for Richthofen and WWI. The three wings gave the airship an amazing lift capacity and unprecedented maneuverability. It's said that Richthofen actually maneuvered the plane to fly momentarily backwards in order to shoot at pursuing enemy planes.


The enemy created nicknames for Richthofen: Le Petit Rouge, the Red Devil, the Red Falcon, Le Diable Rouge, the Jolly Red Baron, the Bloody Baron, and the Red Baron. However, the Germans never called Richthofen the Red Baron; instead, they called him der röte Kampfflieger ("The Red Battle Flier").

Still, everyone knew of the moniker. And with earned his reputation for aerial skill, he led his squadron and Germany to continued victories until Richthofen's demise.