How Elvis Met Nixon Is How Branding Leads to Sales 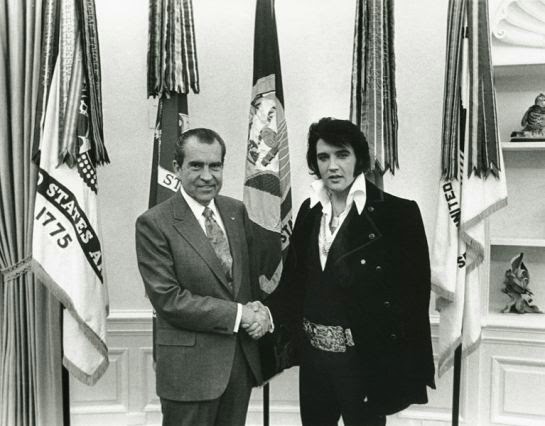 Forty-four years ago, early on the morning of December 21, 1970, Elvis Presley showed up, unannounced, at the gates of the White House to deliver a letter he had written to President Richard Nixon. Elvis wanted to meet with the President and he wanted the title and badge of Federal Agent for the Bureau of Narcotics and Dangerous Drugs. Elvis got everything he asked for. By lunchtime. That day.

How did Elvis do it?

THE BRAND: By 1970, sixteen years into his show biz career, Elvis Presley had evolved into Elvis. The bejeweled, cape-wearing, “See See Rider” singing, Vegas-playing Elvis. Elvis was a brand that everybody recognized and many respected. When Elvis showed up at the door — even the door of the White House — the door was open.

THE ANGLE: Even if you’re well known, and even if you say “please,” you need a selling proposition, a unique brand attribute. Elvis had one: Elvis could relate to everyone. In his letter to President Nixon, Elvis wrote: The drug culture, the hippie elements …do not consider me as their enemy… I will help out by doing it my way through my communications with people of all ages. 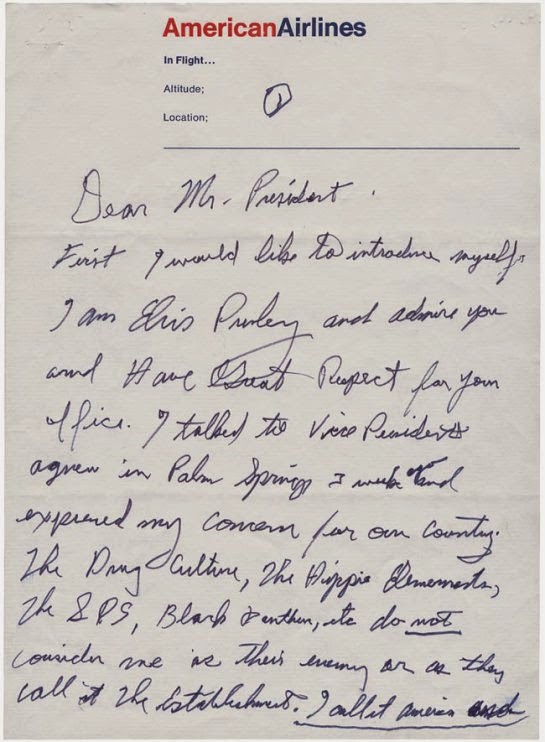 THE ASK: Elvis didn’t beat around the bush. He asked specifically for what he wanted. When you don’t ask, you don’t get.

THE LIMITED TIME OFFER: When Elvis showed up at the White House gates four days before Christmas, the Nixon staff knew they had to move quickly. Elvis was a limited time offer. Better act now.

THE CLOSE: Elvis wasn’t going to leave the White House without a new badge. He knew better than to take “We’ll get back to you” for an answer. Elvis was persistent.

A brand built over time, a unique and well-timed offer and a clear call to action set the stage, and a well-prepared, confident salesman brought home the badge.

Elvis has left the White House 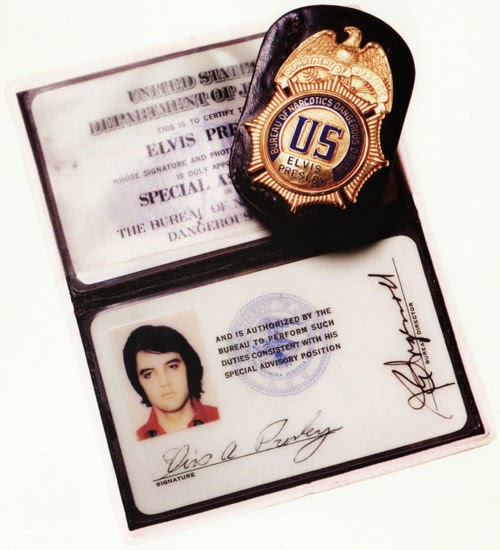 Editor's Note: The late 1960s and 70s were decades of a drug use invasion. Pot, acid, cocaine, and other drugs were woven into the very fabric of the hippie and peace movements, as well as into the subsequent disco age. Under then President Nixon, initiatives began in 1970 to curb the import, production and widespread use of illegal drugs. It became known as the War on Drugs, and everyone in American society was impacted in some way.
_____________

Paul Sage is a marketing consultant and writer, doing business as Sage Advice. Paul has directed marketing communications in both corporate and agency positions for major brands in telecommunications, banking, utilities and business services. Paul also teaches marketing to college students at The University of Phoenix. More of Paul's musings on marketing can be found at www.paulsagemarketing.com.
Posted by Falloure at 9:48:00 AM No comments:

Five years, hordes of unique pageviews, and enough content to fill a respectable book—January 2015 marks the fifth anniversary of Brands In History. Entries include characters from the ancient world, the Dark Ages, the Victorian era, and the 20th Century. Some were bold and noble, while others conniving and ruthless, and still others were kind and gentle. It's the sort of content that keeps audiences dropping in, and they span countries from North and South America to Europe and the Far East. And while Hannibal kicked butt was the first post on this blog (January 9, 2011), the Spartans are still beast as the all time most visited entry to date.

Thanks to industry colleagues and friends for their advice, contributions and encouragement. And to any reader who has dropped in to peruse the content—Thank You! Keep coming and spread the word.

In coming days and months, Brands In History will post some special entries. As well, some announcements that hopefully you will be excited about. I am. BIH continues to look at more history—maybe even your favorite historical characters. Feel free to drop me a note with a suggestion or two.

In the meantime, below are select entries that are connected to January. Leading off is a look at Lincoln who delivered the Emancipation Proclamation January 1, 1863. Winston Churchill died on January 24th, 1965. Al Capone also died in January, but on the 25th in 1947.

Therefore, submitted for your continuing approval...

Gangster Expectations - Al Capone
Posted by Falloure at 8:21:00 AM No comments: