A Horde of Expectations

Gauls, Huns, Mongols, Vandals and Visigoths—these and other unnamed hordes were beyond scary to ancient civilizations, they were petrifying. Even armies perceived them as wild-eyed, animal-like masses, seemingly unruly and hellbent on mauling victims. And when facing an army of them, some imagined horrifying and slow torturous death was sometimes enough to make foot soldiers either bury their heads in the sand, or urinate where they stood. These were—the barbarians.

Barbarian is more of a categorization than it is a brand. Still, there are generalized attributes that come to mind on its mere mention—brutish, bloodthirsty, primitive and savage. Those are common descriptors we've long used to define those that are outside our idea of being civilized, cultivated or polished. To many benefactors of the tireless efforts of humankind to create a benign and safe society—at least on the surface—barbarians are a direct threat to peace and prosperity. But that's all just a bad rap that evolved over time. The truth is that early usage of the term didn't mean what it does today. To a Greek, it is conceivable that a Roman was a barbarian. So, although one might be a barbarian, it was still possible to conduct one's self within the bounds of good taste.


Barbarian, yes, but all in good taste.

Clip from 1994 film "The Shadow" - see footnotes for copyright information.


The whole concept of barbarians as a group originated with the ancient Greeks. The root word is barbaros, and it was meant to point out people from cultures different from Greek, or at the very least, non-Greek-speaking people. However, Greeks sometimes used it to insult competing city-states. This was especially true of Athens, who might deride, say, Sparta. It was similar to how New Yorkers might demean Houston, or any US city that isn't New York. Much of ancient Greece ultimately adopted the word as a pejorative reference to Persia, which might be understandable, given the Greco-Persian conflicts during the reigns of the Persian rulers, Cyrus and Xerxes. But in the beginning, there was nothing dark or nefarious, well, until Rome evolved the word.

Roman opinion was that pretty much everyone but Roman citizens were barbarians, and therefore inferior. This didn't just apply to some of the more tribal societies like the Celts and Gauls, and later the nomadic Goths and Huns. Rome not fond of competing advanced civilizations, such as Egypt or Carthage, but those are different stories. There was some exception given to the Greeks only because a large portion of Roman culture was derived from the Hellenistic period, including elements of language. Thus, we get the Latin derivative, barbarus. And it was from attack after repeated attacks on Rome by various barbarian opponents, and the city's repeated sackings during the first millennia that were the transformative forces on the meaning of the word.


The sackings of Rome were transformative in our evolving idea of barbarians.

The fall of Rome was a painful process, lasting hundreds of years at the hands of all those barbarians that Rome once conquered, or at least irritated. The Dark ages followed the fall of Rome and the western empire—a period of horrific human suffering across all of Europe and into parts of Asia Minor. Much of this time inspires the modern notions of anti-heroes, such as of Conan the Barbarian. His motivations were personal, vengeful, and left a bloody wake across the land in which he travelled.

By the time of the Renaissance, the concept of barbarian was no longer pigeonholing an outlander as perhaps an undesirable or inferior cast in the city-state. Historians will say that barbarian transformed from such usage to become an adjective classifying acts or behavior. The 16th-century philosopher,  Michel de Montaigne, used the barbarous to characterize the dichotomous, bloodthirsty actions of Conquistadors, representing the civilized culture of Europe. He wrote that this was in contrast to the godless, tribal savages who supposedly needed to be civilized, but were the innocents and often peaceful.

Barbarous, barbaric, and barbarism are how we now associate violent, heinous, or atrocious acts. This isn't being bad. Barbaric, or any derivative, is about being savage and bloody—it is aligned with being wantonly vicious, cruel, almost inhuman. A murderer.

Yet, and with a protracted but ...  because it is an undeniable truth that we humans have a barbarous streak in us as long as a DNA strand, part of us holds a sneaking admiration for our barbarian ancestors. Denying it is being less than honest. After all, most people on this planet, at least in the civilized nations, share DNA from invading barbarian savages, such as Genghis Khan, Kublai Khan, the Huns, and hordes of Viking warriors that pillaged the British isles and much of coastal Europe.

Even in ancient times there was regard for the noble savage—although that expression is more often associated with the native plainsmen of North America. Still, even the Greeks gave their barbarian enemies their due, which is evident in a reproduction of a 3rd century BC sculpture. The original was commissioned by a king to commemorate his victory over the Gauls. It represents a dying Celt warrior, a barbarian, resting on his shield, barely able to hold himself up. It implies his struggle against death, symbolizing the resolve, determination and bravery of worthy adversaries. Art historian H. W. Janson interpreted the message as, "they knew how to die, barbarians that they were."1

A sneaking admiration for a worthy adversary, "they knew how to die, barbarians that they were."

Romans had a fascination with Barbarians, as well. Gladiators were often prisoners, those barbarians captured during combat. In the games, they were pitted against other barbarians or prisoners in violent contests that were sometimes recreations of battles Rome fought against Celts, Gauls, and others. Much of our impressions about gladiators come from Hollywood. Watching cable shows like Spartacus or movies like Pompeii postulate the idea of pimping gladiators to Rome's more randy women of society. There is not a lot of evidence for this, but historians acknowledge that some women certainly found gladiators sexually attractive. No doubt there were clandestine sexual hook-ups between high-caste spectators and their heroes of the arena. But a woman of status cavorting with a gladiator—a barbarian—was very inappropriate. And as wildly wicked as Romans could be in private, their public personas were immensely important to them. So if something like an affair with a gladiator got out—it was bad.

Brand expectation for barbarians evolved considerably. Initially, they were simply foreigners—people who perhaps struggled with the language and customs of the place they were visiting. Depending on the extent of the transgression, being called a barbarian could be a simple label or an insult. Either way, barbarians were outsiders and deserving of wary attention. Rome really had the impact on the term. It's encounters with the Germanic tribes of Europe, and then suffering so many violent, penetrative invasions, barbarian grew to express a wholly different expectation. Barbarians grew to become manbeasts, ready to destroy civilization. 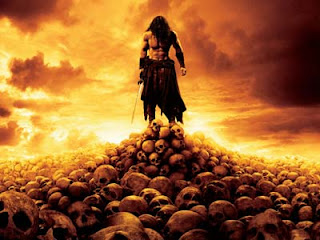 An Additional tidbit
Barbara is a derivative of barbarian—yes, it is. It was originally meant as, "a woman barbarian." Likely it was not complimentary.