The lady with a lamp.

Florence Nightingale was the woman who lit the way for the entire modern discipline of nursing by creating the world's first secular nursing school in 1860. In doing so, Nightingale embedded herself in western culture as the conjured image of a gentle, concerned and dedicated caregiver. Yet more than simply history's celebrated English nurse, Nightengale was a writer and statistician, too, which significantly aided her efforts.  And it was Nightingale's deep belief in God that led her to be nursing. And what nurse she was. 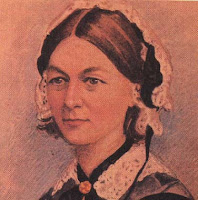 While the overview is that Nightingale established professional nursing, it came with sacrifice. Her decision to enter nursing in 1844 angered her mother and sister because she was going against the accepted grain of expectation—meaning she wasn't going to automatically become a wife and mother. Her access to family capital was therefore reduced. Despite this family opposition and the restrictive societal code for affluent young English women, Nightingale went on to educate herself in the art and science of nursing. Moreover, she remained celibate her enitre life. Certainly Nightingale was courted by men of influence and means, she even developed emotionally intimate friendships with men, but she was convinced that marriage would only interfere with her ability to follow her call to nursing.

The event catapulting Nightingale's nursing efforts came during the Crimean War, circa 1854. Without overindulging in background, suffice it to say that the Crimean War was a powder keg that went off between Western and Eastern European powers—a preview to World War I, and which took place primarily on the Crimean peninsula of the Black Sea—hence, Crimean War.


Word of horrendous conditions for the wounded reached Nightingale, then in Britain. Along with a few dozen volunteer nurses she had trained, Nightengale traveled to a British base in Crimea. Team Nightingale arrived in November of '54 to find an overworked medical staff, indifferent to the wounded and resulting in poor care. Mass infections were common and often fatal.

Eventually the experience would convince Nightingale that most of the soldiers at the hospital died because of poor hygiene and living conditions. On her return to Britain, in fact, she arrived at convincing evidence about the importance of sanitary living conditions through statistical study. This was a compelling study that proved the need for better hygiene in hospital care. Ultimately her efforts would reduce military deaths in peacetime. This also led to her focusing her attention to the sanitary design of hospitals.

Still, the situation Crimea was overwhelming. Team Nightingale worked hard to treat the wounded, leading to public recognition of the effort. This led to the establishment of the Nightingale Fund for the training of nurses with the help of generous donations. It was with £45,000 now at her disposal from the Nightingale Fund that Nightengale set up the training school at St. Thomas' Hospital on 9 July 1860. Her first trained nurses began work on 1865 at the Liverpool Workhouse Infirmary. Her movement only grew from there.

By 1882, Nightingale had established nursing as a growing and influential presence. Her trained nurses were becoming matrons at leading hospitals throughout Britain, and her movement was psreading to Europe, the United States, and as far as Australia. Nursing was no longer plodding care by the uninformed. Nursing was budding as a profession of dedicated professionals educated to provide healing assistance.

Florence Nightingale is in herself a brand position. Her astounding efforts make her name synonymous with nursing and excellent care of the sick and wounded—and the founder of professional nursing.


During the Crimean War, where Nightengale tended to wounded soldiers, she was dubbed "The Lady with the Lamp", after her habit of making rounds at night while carrying the lamp through dark wards.

She is a ‘ministering angel’ without any exaggeration in these hospitals, and as her slender form glides quietly along each corridor, every poor fellow's face softens with gratitude at the sight of her. When all the medical officers have retired for the night and silence and darkness have settled down upon those miles of prostrate sick, she may be observed alone, with a little lamp in her hand, making her solitary rounds.  —London Times

The very mention of her name still conjures the image of a gentle face in white bonnet and apron. She was considered an angle, and not altogether unlike a Mother Teresa. Not so much today, but the lamp was also a symbol of Florence Nightengale—holding vigil over the sick, the bright light in the darkness to give hope and comfort.

Once trained, Nightengale nurses took an oath as follows:

I solemnly pledge myself before God and in the presence of this assembly, to pass my life in purity and to practice my profession faithfully. I will abstain from whatever is deleterious and mischievous, and will not take or knowingly administer any harmful drug. I will do all in my power to maintain and elevate the standard of my profession, and will hold in confidence all personal matters committed to my keeping and all family affairs coming to my knowledge in the practice of my calling. With loyalty will I endeavor to aid the physician, in his work, and devote myself to the welfare of those committed to my care. 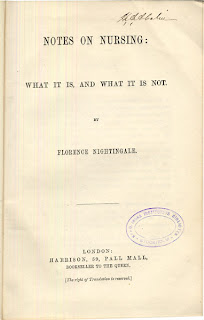 Writing aided Nightingale in her successes in establishing nursing and the importance of disciplined care of the infirmed and wounded. Published in 1859, her 136-page Notes on Nursing was the cornerstone of her curriculum her school and other nursing schools being established. Once excerpt follows,

"Every day sanitary knowledge, or the knowledge of nursing, or in other words, of how to put the constitution in such a state as that it will have no disease, or that it can recover from disease, takes a higher place. It is recognised as the knowledge which every one ought to have-distinct from medical knowledge, which only a profession can have."

Nightingale's slim book appeared when the simple rules of health were only beginning to be known.

It isn't widely known that from 1857 onwards, Nightingale was sometimes bedridden and suffered from depression. There is no documentary evidence on the cause, or causes. But some agreement proposes that Nightingale might have suffered from a particularly extreme form of brucellosis, the effects of which only began to fade in the early 1880s. Nevertheless, Nightingale was a phenomenal impact on social reform. During her bedridden years, she still managed pioneering work in the field of hospital planning, and her efforts spread quickly across Britain and the world.