The Fast and the Furious

Alexander the Great conquered a big chunk of the known world in ancient times, and he did it quick. During his 13-year reign he went from prince to general to king, and he spread his empire from Macedon to the Indus River.  Along the way he totally deconstructed the most powerful empire of the day—Persia. And while he was known for dabbling in local Persian customs, Alexander also wound up with the unearned reputation for being the single greatest telegraph of Hellenic culture. Cities named for him pepper the map throughout the near east. His brand endures as being undefeated in battle, so he is the yardstick by which all commanders are measured. In his day, however, the Alexander brand ran much deeper. 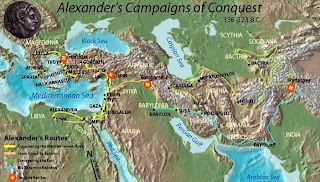 As a man, he was born Alexander III of Macedon and lived from the year 356 – 323 BC. He started off by inheriting his father's kingdom of Macedon, which is just north of what is now Greece proper. Alexander's father was Philip II. His mother was Philip's fourth wife, Olympias, the daughter of Neoptolemus I. This is huge to the Alexander brand but more on that shortly.

Olympias is a central character in the Alexander brand—and she was naughty. You need to know that while Philip had several other wives, Olympias was his principal wife. And by all accounts she was a whacked out lady. She had a thing for sleeping with snakes and practicing something like witchcraft. The snake thing is a real kicker because the supreme god, Zeus, was said to have often appeared as a snake, especially when he was in a randy mood and had a vixen in his sights. So by association, if Olympias liked to sleep with snakes in her bed, then it is possible Zeus could have slithered in ahead of Phillip and fathered Alexander. Phillip was never really sure. Even the ancient historians debated it. True or not (obviously not to modern readers) it made for a strong sound byte.

In reality, Alexander didn't need the Zeus mythos. He had some serious lineage that gave him epic brand attributes. Those came from his mother's side, as she was a descendant of Neoptolemus, son of Achilles. That alone infused Alexander with some serious heroic blood. While Zeus was a "god" who may have fathered Alexander, Achilles was accepted by ancients as a real person with a traceable bloodline. 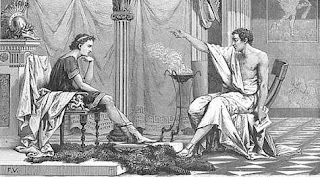 When Alexander was thirteen years old, Philip chose Aristotle to tutor his son. The context of the teaching was within the Temple of the Nymphs at Mieza. The place is really only important to the Alexander brand because it was there Alexander would meet some of his closest advisers. They were the children of Macedonian nobles, such as Ptolemy (think Cleopatra in a few centuries), Hephaistion, and Cassander. Aristotle taught these future leaders about medicine, philosophy, morals, religion, logic, and art. That's also when Alexander developed a passion for the works of Homer, and in particular the Iliad; and that helped further Alexander's identity with Achilles. He even slept with an annotated copy. His nickname among his fellow students was "Achilles."

All this adds up to no surprise that Alexander had an overdeveloped sense of ambition. In all honesty, understanding Alexander requires a lot of study time. Complex family dynamics, touchy politics between Macedon and the Hellenic League (alliance of Greek city-states), his mother's overarching position that Alexander ran with the blood of gods and immortals—combined with his Achillian identity, and you have a guy convinced he deserves an empire stretching to the ends of the world.

Most importantly, he understood brand acceptance within targeted audiences. He wielded bloody power amongst the Greeks to hold down revolts, and he presented himself a god king to Persians who believed kings were of the gods. Alexander was incredibly conscious of his brand.


Therefore, submitted for your approval...

Alexander kicked off his brand rollout with everything going for him—rumors of Zeus as his father, the Achilles bloodline, his intellect and study under Aristotle. And he did have military skill. By the time he took over Macedon, Alexander had already fought in battle and led an army. But there is one attribute that, in truth, was his greatest weapon, though never seemingly discussed. Alexander repeatedly did the unexpected.

Example one: The city of Phrygia is in modern Turkey and was known to have a knot guarded by priests. It was called the Gordian Knot. Legend held that the knot was so complex that whosoever undid the knot would be king of all Asia. What is true is that Alexander undid the knot. It's the how he undid it that is debated is now—although either recorded solution works. Rather than try what all others tried Alexander did either of the following:

2. Removed the knot from the staff it was on, thus exposing the two ends, allowing him to undo the knot.

The first is more fun and the one of legend and befitting the brand.

Example two: Alexander's route to conquer Persia was atypical. His initial course was south along the Mediterranean coast. Rather than sack a few towns and turn east to chase down opposing armies inland, he captured the critical port cities between modern day Turkey and western Egypt. And since the Egyptians saw Alexander as a liberator from Persian rule, they covered his southern flank. All in all it prevented Persian armies from getting behind Alexander and trapping him or cutting off his supply lines. That's when he turned east and swept across old Babylon to Pakistan.

That was out-of-the-box thinking in those days.

Example three: One of those port cities was Tyre, which was built on an island off the coast of modern day Jordan. Tyre had high walls, too. Alexander simply constructed a causeway from shore to the island so he could get his army and siege machines onsite. From there he wore down the walls and its defenders.

Surely only the gods inspire such original thinking! And surely such a man is destined for greatness.

On the day that Alexander was born, Philip was preparing himself for his siege on the city of Potidea. On the same day, he received news that his general Parmenion had defeated the combined Illyrian and Paeonian armies, and that his horses had won at the Olympic Games. It was also said that on this day, the Temple of Artemis in Ephesus—one of the Seven Wonders of the World—burnt down, leading to the headline that it burnt down because the goddess Artemis was attending the birth of Alexander.

Combine his skill and out-of-the-box thinking and these events with a possible bloodline from Zeus and from Achilles, and it would be apparent to the ancients that Alexander was "favored by the gods."

"Favored by the gods."


Alexander the Great—what else do you need from an epithet earned while alive? Never having lost a battle, his success as a commander was unparalleled. He was constantly outnumbered. But it was through his creative strategies, use of terrain, mastery of the phalanx, and cavalry tactics that combined with bold strategy and ability to inspire fierce loyalty among his troops—these made him great. 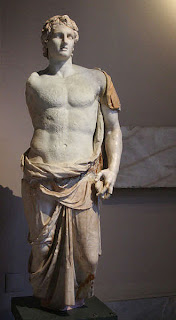 Alexander cultivated his graphic standard through a reputation of being hansom and of pleasant presence. In reality he was around 5'3", short for even then. He was not unattractive according to Plutarch, nor was he the classic Greek hood ornament of the day. But statues represented him as such. And his coinage showed him as fair and powerful.

5. Implement internal branding programs to reward employees for behaving in ways that are consistent with the brand personality

Do or die. In no way did Alexander tolerate opposition. He wiped out the entire city of Thebes for revolting when he first took power. And his taking power was very likely a result of his ordering the assassination of his father. He preferred diplomatic solutions, but if it came to blows, you were toast. And on the flip-side, it was fortunate Alexander's reign was short-lived—his hold on the empire was not sustainable. The Persian campaigns severely drained Macedonian treasuries and manpower, opening the door for Roman conquest in the centuries to come.


It is recorded that Alexander eventually exhibited signs of megalomania and paranoia. Some of it is derived from his extraordinary achievements combined with his sense of destiny, and the propping up by his companions. Some of his delusions are evident in recorded history. Did he really believe himself a deity?

Olympias strongly suggested he was the son of Zeus, something confirmed to him by an oracle. And he did begin to identify himself as the son of Zeus or Ammon (Egypt's version of Zeus). However, Alexander was a pragmatic guy who well understood the challenges of ruling a vast array of culturally disparate subjects. Some of their cultures stated that the king was divine. In reality, it may have been a strategic marketing decision playing to the demographic of his subjects. Rather than megalomania, it may have been a practical attempt at shoring up his rule and keeping the empire intact.

Alexander moved into history as fast as he did across the plains of the near east. He was a quick moving storm hitting everything in his path with fury. But it has to be said that in many ways his true test was never held. No one really saw him coming in the way that he did. Many armies surrendered before the fight even began. He was turned back at the Indus River by his own men, not the great army amassing to fight him. Had he lived, he may have been an epic fail. But shortness of time saved him. And like many bright lights that burn out quickly, they leave an indelible mark.