Baseball and the Rosetta Stone 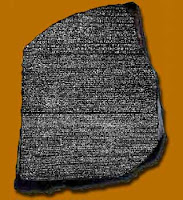 What in Babe Ruth’s name does baseball have to do with an ancient stone bearing Egyptian and Greek text? A lot. A few years ago I coached a little league team—T-ball or coach pitch. During a game, my team was fielding and there were two outs with a runner on first. My first baseman fielded a hit right to him and he was only steps away from the base. I hollered, “Tag the bag!” He proceeded to sprint after the runner heading to second, and who outran him, making it to second, while the batter also made it to first.

When I said, “bag,” my players had no idea I meant base. They were new to the game and didn’t have the slang down. From that day on, I made sure to define my terms—in baseball and in marketing.

That’s the relevance. The Rosetta Stone allowed scholars to understand ancient Egyptian hieroglyphs because they already knew ancient Greek. Similarly, agency-speak and corporate-speak do not always align. And if there is one thing you learn, it’s to make sure you and your client are working from the same dictionary. You may think it doesn’t matter, but it can mean the difference between your team winning a shutout or suffering an epic slaughter.

And for an added historical tidbit--the Rosetta Stone was discovered by Napoleon's expedition to Egypt in 1798.