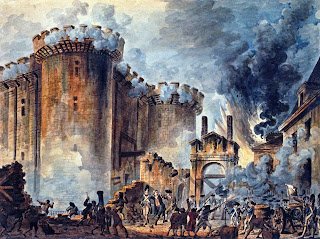 Bastille Day (July 14, 1790) commemorates the flashpoint igniting the French Revolution. Located in Paris, France, the Bastille was a medieval fortress that served as both armory and prison for political dissidents. It represented royal authority and symbolized abuses by the monarchy. When the public thought Louis XVI had fired a representative of the people, Frenchmen revolted and stormed the Bastille, touching off a powder keg.

French politics of the era were complex—which is an understatement. France's future would have to navigate a tumult of foreign monarchial interests, Papal meddling, and noble family protectionism, all amidst a boil of conflicting anti-royal factions—some pro-Republican, others consisting of various sub-factions of moderates, constitutionalists, and labor interests. There were even fascist-like groups. Revolts dusted up even before the storming of the Bastille. But it was that moment historians mark as the beginning of the French Revolution, the outcome of which defines the country we know today.

Dating back to ancient times, this region has contributed so much to history. Each of the entries below is either directly connected to France, or at the very least, a link with a detour. They explore the Celts, contributions to Christianity, global communications, and, of course, Napoleon.

Horde of expectations − Celts and other unnamed hordes were beyond scary to ancient civilizations, they were petrifying. Even armies perceived them as wild-eyed, animal-like masses, seemingly unruly and hellbent on mauling victims. Yeah, these were the barbarians.

Brand everlasting − At the end of the Dark Ages we get Charlemagne. He played a significant role in Christianity and with it, united much of Europe. He did so by integrating a lot of "tribes" into his empire, while simultaneously integrating select pagan traditions into Christianity.

Forged by fire − Joan of Arc is perhaps the toughest woman in history. And if there is one heroine that burns in the psyche of western civilization, it would be her divine brand.

The Napoleon complex − Napoléon is a name imbued with no small amount of brand attributes. Both celebrated and criticized, he rose to power amidst the French Revolution, and so successful were his military campaigns that he became emperor in 1804—and held it until 1814. These entries below walk you through the evolution of the Napoléon brand.

§ Rise of the little corporal

§ The return of Caesar

§ Emperor of the republic

A wing and a prayer − Something big started in 1851 when Paul Julius Reuter moved to Paris.


Baseball and the Rosetta Stone − What in Babe Ruth’s name does baseball have in common with France and an ancient stone bearing Egyptian and Greek text? Read and find out.