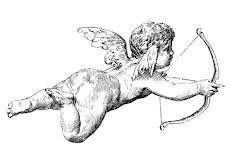 A year after Snowmageddon and we're again heating things up with love. Florists are thriving. Restaurants are packed. And even a few travel destinations are booked. And it's all due to this chubby little cherub that's one of the most ancient of brands—the mischievous little archer that has made an ass of many would-be lovers and given others just the shot in the arse needed to win over a heart. Cupid is his name, which is Latin for passionate desire. Ah, but the Romans don’t have sole claim over this nekkid troublemaker. Like much of its culture, Rome swiped its mythology from the Greeks, and Cupid is no different. He was known to ancient Hellas as Eros, the god of love. And since Greeks were a particularly randy lot back in the day, they portrayed him as a healthy young adult male—sort of a Magic Mike of the classical world. Eros makes his first literary appearance around 700 B.C. His origin story varies but ultimately he was dubbed the son of Aphrodite and Zeus.

His job? To “incite an erection”—well, along with all the passion and devotion pursuant to amorous endeavors. However, our little angel can switch to demon in a heartbeat because he liked souring the love potion. You see, while the pierce of his golden arrow inspired love, Cupid also carried led arrows. Those caused the struck victim to be repulsed by whoever pursued them. Apollo suffered this fate when hit by Cupid's golden arrow while the object of his affection, Daphne, was violated by a led one.

Over time, Eros evolved from a hansom human-like specimen to Rome’s Cupid, having wings. The arrow and quiver came into play here. Both the wings and the arrows would stick from then on, although as we passed through the Dark Ages and into the Renaissance, Cupid became a cherub or child-like angel. That’s not to say that Renaissance art doesn’t have a more Romanesque version. It does. But the dominant apparition to emerge by the 18th and 19th centuries is the chubby-cheeked, mischievous baby angel.

Whether Greek, Roman, Renaissance, or post-millennium, Cupid is a brand attribute, a position statement, and brand personality—an icon, really. Love and passion are central themes and define the brand attribute of Cupid. Those are, after all, the brand promises, as well. And nothing is more central to the human condition than love’s fulfillment of the heart and expressed in pleasures of the flesh. Our history is written by love and all that it implies. Indeed, Cupid’s motto dates back to the 1st century BC with the Augustan poet Vergil,

Omnia vincit Amor: et nos cedamus Amori.
Love conquers all, and so let us surrender ourselves to Love.

Therefore, my friends, Happy Valentine's Day.
Note: this is an updated version of a prior post.
Posted by Falloure at 12:20:00 PM